One landmark to Lake County's agricultural past is the Bonner Heritage Farm in Lindenhurst, operated by the Lake County Forest Preserves through the Bess Bower Dunn Museum of Lake County. Five generations of Bonners lived and worked this farm from 1842 to 1991, farming up to 1,000 acres of land and caring for a herd of up to 100 cows.

The farm was homesteaded by William Bonner (1815 - 1881) and Margaret Gordon Bonner (1810 - 1895) of Aberdeenshire, Scotland.
In 1840, they settled in Somers, Wisconsin, approximately 23 miles north. Two years later, William purchased the property on Sand Lake Road in today's Lindenhurst for its "good supply of trees." William was a carpenter by trade and built many homes and barns in the area using the trees from this property.
The first building William constructed on the farm was the main barn used for housing five cows and storing hay. 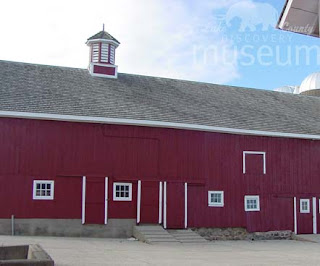 Bonner used hewn oak and hickory from the property to build the 40' x 44' barn. To this day it is the most important building on site, and is possibly the oldest surviving “great barn” in Lake County. The term “great barn” refers to the period between 1840 and 1910 when many large barns were constructed in the United States. East face of William Bonner's main barn. 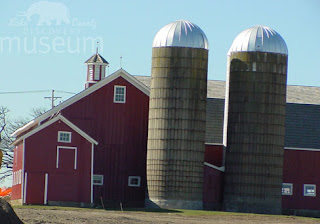 View of north face of the great barn complex. (above) The concrete stave silos were constructed by a commercial company. The east silo (at left) was constructed in 1932 and connected to the milking hall by a small gable roofed structure that was modified when the second silo was added around 1950.

Over a 100-year time span, the main barn was expanded with five additions and two silos. Each generation added onto the barn, to accommodate more cows and refrigeration equipment, reflecting the farm’s growth from a small herd of dairy cows to a herd of up to 100 cows and heifers in the 1950s. 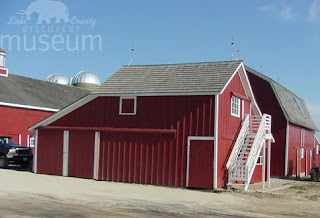 Other structures on site built by William Bonner include a carpenter's shop and two farmhouses (one for his family and one for his brother James’ family). A portion of the carpenter's shop (right), was used as a granary. The building also has original blacksmith forged iron hinges and handmade nails reaffirming this as one of the oldest buildings on site. 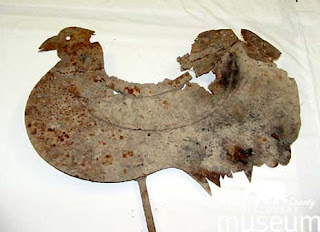 The chicken weathervane (above) was found in the carpenter's shop in 2003. "Shorty" Bonner confirmed that the weathervane belonged to William Bonner and had been on top of the cupola of the main barn in the 1800s. Its date is unknown, but pre-dates William's death in 1881. A metal conservator assessed the weathervane's condition and determined that it is beyond the capabilities of current conservation technology to repair. It is now in the museum's temperature-humidity controlled storage. 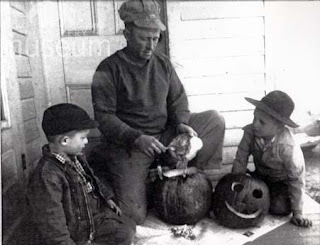 In 1965, William's great-grandson, Howard "Shorty" Bonner (1918-2009), sold off the dairy herd when his son John went off to college. The Bonners continued to actively farm the property until 1991. Shorty Bonner and his sons, Bruce and John, carving pumpkins on the porch, circa 1951. Courtesy of the Bonner Family.

In 1995, the Bonner Family donated 8.5 acres of the farm, including the buildings to the Lake County Forest Preserves. Since 2004, the public has enjoyed self-guided, interactive outdoor exhibits on site about the Bonners and the buildings, and school programs are offered on a regular basis, focusing on agricultural topics.