Andrew Carnegie and His Library Legacy


Before towns had public libraries they often had “reading rooms.” Waukegan had maintained one through its library association beginning in 1845, but the dream was always to have a true library for its citizens. If not for a generous donation from Andrew Carnegie in 1903, that dream may have taken many more years to be realized.

Carnegie (1835-1919) was one of America’s most successful businessmen. He immigrated to the United States from Scotland with his family in 1848, and settled in Allegheny, Pennsylvania.

Carnegie worked at a cotton mill, Western Union and the Pennsylvania Railroad before beginning his own business in 1865—the Carnegie Steel Company.

He was convinced that education was life’s key and that people should have access to information for self-education. In this regard, he established the first Carnegie Library in his hometown in Scotland in 1881. 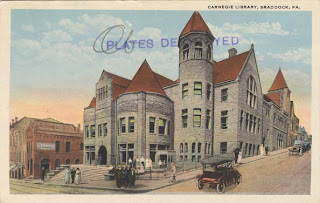 The first Carnegie Library in the United States was built in Braddock, Pennsylvania in 1889. Curt Teich postcard A23659 (1911).

The amount of money that Carnegie gave each town was based on U.S. Census figures, and averaged about $2 per person. Nearly all Carnegie libraries were built according to "The Carnegie Formula," which required matching contributions from the town that received the donation. Generally, this meant the people had to be willing to raise taxes to support the library. He also required that the town provide the building site, and free service to all.


The Carnegie Library in Waukegan, with its unusual semicircular shape and Ionian Greek style architecture stands at the corner of Washington Street and Sheridan Road. It served as the community’s library from 1903-1965. 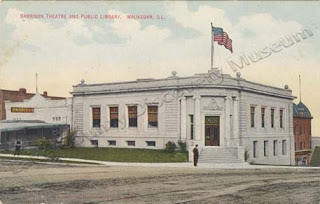 Jack Benny worked as a pit musician at the Barrison Theater (on left in postcard above) until 1911, when he left Waukegan to perform in a vaudeville act with Barrison pianist Cora Salisbury. Postcard, circa 1907 (LCDM 61.8.101). 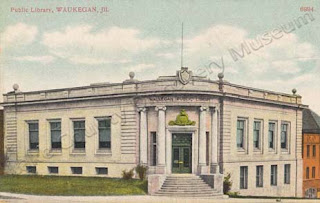 Carnegie's donations coincided with a time of expansion for many towns, and when states were seeing the need to establish public libraries. Waukegan Public Library, circa 1910 (LCDM 61.8.121). 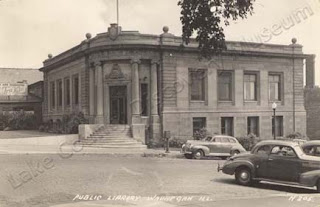 Another view of the library, showing the unusual construction on the bluff at Sheridan Road, circa 1945 (LCDM 2006.17.2).

In all, Carnegie provided the funds to build approximately 1,900 public libraries in the United States and over 2,800 worldwide. It cost him over $41 million to build the U.S. libraries, and in his lifetime he gave away $350 million. After his death, the Carnegie Corporation of New York continued his tradition of philanthropy.

Waukegan's "new" public library is located on County Street, near the county courthouse. The Carnegie Library still stands on Sheridan Road, and there is much debate over what function the building can serve. One of America’s greatest living writers, and Waukegan native, Ray Bradbury (1920- ), discovered books and a love of reading at Waukegan's Carnegie Library, benefiting from Andrew Carnegie's belief that “the man who dies rich, dies disgraced.”
Posted by D_Dretske at 2:52 PM