One of the most significant, yet little known contributors to the early motion picture industry was Edward Hill Amet (1860-1948) of Waukegan. 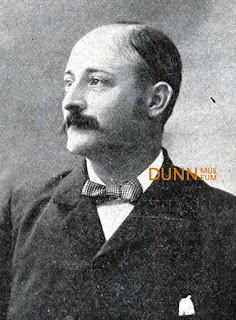 In the 1890s, electricity was not readily available. Amet’s Magniscope was operated manually by hand-crank and offered a choice of electric or gas illumination, allowing it to be used anywhere. In many ways, it was an improvement over Thomas Edison’s Kinetoscope. 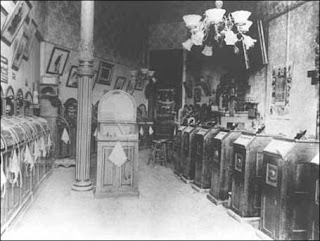 Edison's Kinetoscope was a motion picture viewing machine which used the 35mm film format, patented by Edison. Kinetoscope parlors were all the rage in major cities, but the machine allowed for only one person at a time to view moving images through a peephole. In 1894, Amet had seen the Kinetoscope in Chicago and was impressed, but not satisfied. Amet improved on Edison’s design by projecting images for all to see. Photo of Kinetoscope parlor in San Francisco, circa 1895. 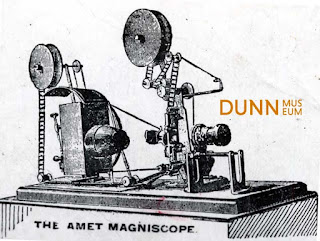 The Amet Magniscope's versatility made it the first practical 35mm film projector. Dunn Museum.
Amet's Magniscope used Edison's 35mm film format, and had gears which pulled film strips behind a lens at 32 frames per second, making the projected images appear to move realistically. The now familiar reel-to-reel arrangement, which Amet pioneered, was a significant step forward in film projection design.
According to George K. Spoor (1871-1953), while he was the co-manager of Waukegan’s Phoenix Opera House in 1894, Amet approached him for money to complete work on his “machine for the projection of motion pictures.” There is dispute among historians whether Spoor indeed gave Amet the money to start his business, but most agree that Spoor managed Amet's motion picture interests before moving on to found Essanay Studios in Chicago. 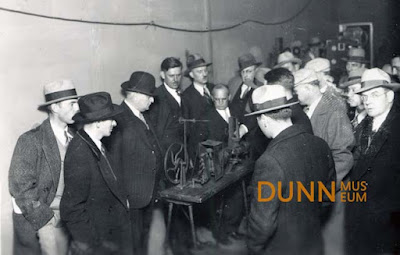 Spoor (third from left in bowler) discussing Amet's Magniscope with curious onlookers, about 1933. Beginning in the 1920s, there was a great deal of interest in Amet's work and in promoting Waukegan as the birthplace of motion pictures. Dunn Museum.

When Amet's projector was finished in late 1894, he acquired two discarded Kinetoscope films to show on his Magniscope. He cemented the films end-to-end and projected them against a wall in a factory building. “After the demonstration that night, there was not much sleep for any of us,” recalled George Spoor.

According to Spoor, the next day he bought 14 more discarded Edison films, and put out advertisements for the “Great Motion Picture Show” at Waukegan’s Phoenix Opera House at 10, 20 and 30 cents admission. They showed the films with Amet’s machine and made $400 the first week. 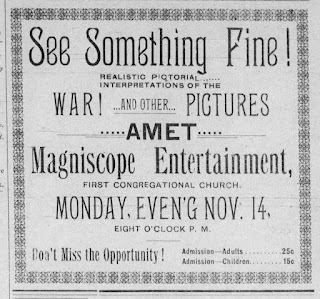 Advertisement to see Amet's motion pictures shown on the Magniscope at the First Congregational Church in Waukegan, November 14, 1898. Waukegan Weekly Gazette, November 11, 1898. Newspapers.com
It is generally accepted that the French Lumiere Brothers’ showing of motion pictures in Paris to a paying audience in the winter of 1895 was the beginning of the movie era. If Spoor’s memory can be trusted, and later accounts by Amet's brothers, the Magniscope showing pre-dates the Lumieres’ by one year. Waukegan newspapers from this period cannot be found adding to the rumors that Edison had them destroyed. 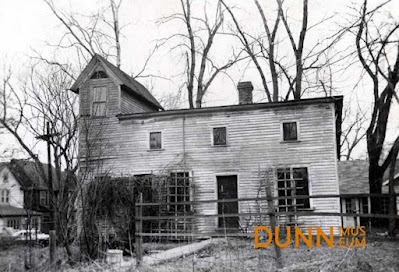 Amet's laboratory in the backyard of his property on North Avenue, Waukegan. This is where he developed his film and worked on his inventions. The building was razed in 1966. Dunn Museum.
From about 1895 to 1899, Waukegan became the center for the movie machine business as Magniscopes were produced at the Electrical Recording Scale Company and sold for $100 each.

Magniscopes were available to anyone without territorial restrictions, were manually operated, and did not require electricity as an illuminant source. Amet sold at least 200 to traveling showmen who were using lantern slides to entertain audiences, and who easily adapted to the moving picture format.
Amet is credited with at least 59 patents, including a musical instrument the “ethelo,” a guidance system for naval torpedoes (which he sold to the British government), a process for producing acetylene gas as an illuminant, and a fishing reel.

Remarkably, the Magniscope was not patented. Thomas Edison (1847-1931), who earlier had patented the 35mm movie film format, sued Amet and other inventors and entrepreneurs for using this film type. The results of the lawsuit meant that Amet could no longer manufacture the Magniscope. But with hundreds already in use, Amet was ready to move on to other inventions.

In 1957, Amet’s brother, Herbert (1880-1959), recalled that because of Amet’s improvements to the Edison Talking Machine, “Edison detested Ed with an undying hate. He had those gramophone patents.” Rumors abounded that Edison sent his thugs into towns to destroy any newspaper evidence of Amet's invention, in order to claim sole title to inventing motion pictures. 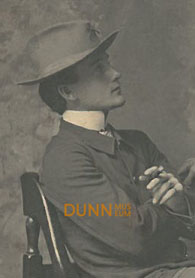 Herbert "Herb" Amet, 1898. Herb worked with his inventor brother, Edward, in the laboratory. Herb was a "player" in Edward's films, including in the "Boxing Brothers." 62.62.2, Bairstow Collection, Dunn Museum.

Amet left Waukegan around 1904, heading west and settling in California. He continued working on motion picture devices, as well as other inventions. When he died in 1948, he was working on a cure for cancer.

His obituary appeared in the New York Times:

Edward Hill Amet
Redondo Beach, Calif., Aug. 17 - Edward Hill Amet, an inventor of motion-picture equipment, died at his home here yesterday. His age was 87. In 1895, Mr. Amet perfected the nagnagraph, known as the "grand-daddy of motion picture cameras." The first model of the camera is in the Smithsonian Institution.

The Bess Bower Dunn Museum acquired a Magniscope in 2001, which is on permanent display in the museum's exhibition galleries. 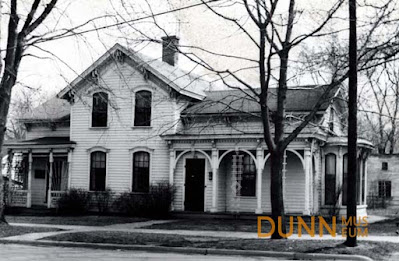 Amet's pioneering films will be discussed in next week's post. See my post Amet's Films.
Posted by D_Dretske at 3:50 PM

As a young boy in the late 60's I lived on Cory Ave around the corner from the Amet house. An elderly gentleman named "Elmer" who lived a couple of doors down from the Amet house used to tell me and a friend about how some of the first filmed movies were of his chickens. Also, they went to the Dunes state park to make films. We didn't know what to think at the time. Elmer remembered the laboratory which he said was no longer there.

That is fascinating to have such an interesting connection to Amet and his work. Thanks for sharing.

It must have been disappointing and encouraging at the same time for Amet when he projected Kinetograph films. Those were shot with a plain black backdrop, the tar paper of Edison’s Black Maria. The figures all appear without anything around and behind them, perfect when viewed on the Kinetoscope. Something eldritch goes with it that also has to do with the greater speed at which the Edison films were exposed, namely between 40 and 48 pictures a second. Amet’s projector attained only 32 changes per second.


I grew up on Center St. which was a few blocks North of 421 North Avenue and I walked past the house many times when the laboratory was still in the back. It should have never been torn down like many other structures that we have lost.
Elmer Rehmer lived next door to the North at 425 North Av. and there is a photo of him in the Waukegan Legacy Our Landmarks which I researched for the Waukegan Historical Society for the placement of the Near North Historic District to be placed on the National Register. The booklet is available for $5 at the WHS library which is in Lilac Cottage in Bowen Park next to the Waukegan History Museum.
I have been giving historic bus tours of Waukegan in Fall every year and we usually go by Amet's home and other interesting landmarks including the Bradbury home, Vincent Price's grandfather's estates and the Jack Benny home plus a lot more interesting places.
Chandra Sefton chandra12@aol.com

Tyrrell Duncombe, owner of the Duncombe Opera House in St. Thomas Ontario, bought an Amet Magnoscope in 1896 and intended to show the first pictures in Canada in his opera house. As a result of delivery delays the first showing was in nearby Aylmer in November 1896. Tyrrell eventually sold the machine a few months later in 1897. I would be interested in discovering any additional information about this machine and possible newspaper articles about the shows in the various town of southern Ontario. Michael Duncombe Ball, mdball@sympatico.ca

Newer Post Older Post Home
Subscribe to: Post Comments (Atom)
Use of material on this blog must be properly credited and may not be published without written consent. Contact Diana Dretske ddretske@lcfpd.org Thank you!
This blog's subscription service has changed from Feedburner to follow.it. Current and future subscribers to the Lake County History Blog will receive new post notices from follow.it. New subscribers, please submit your email above.