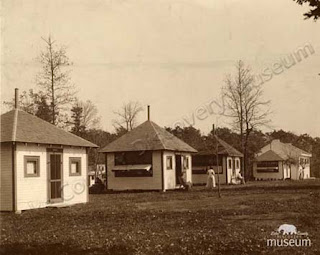 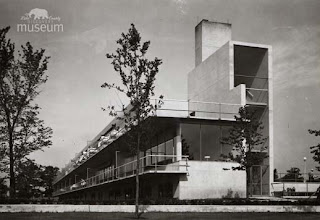 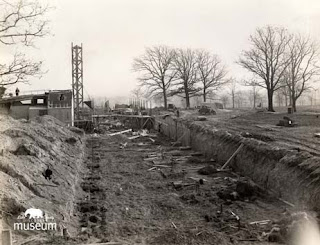 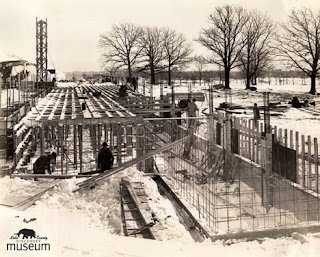 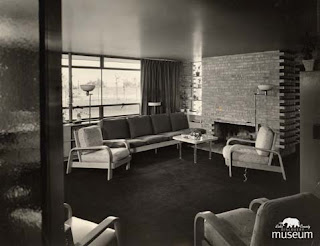 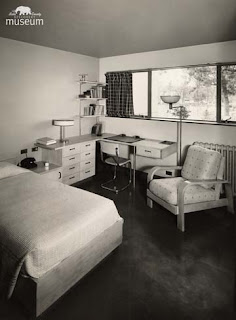 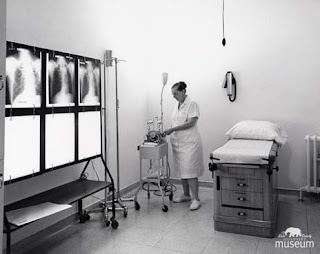 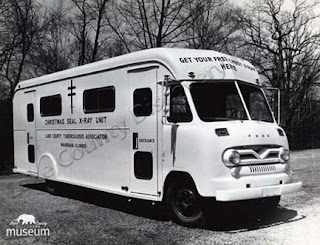 Fortunately, the "Belvidere Medical Building" continues to operate as part of the Lake County Health Department and serve the community.
Posted by D_Dretske at 10:58 AM

I work here, And WOW, what a difference. The lobby in 1940's looks like a posh hotel, now its sad..just so sad looking. The end of your article mentions the LCHD vacating. That is not the case. we are still there! With no end in sight! I shared this with my coworkers because we could never in a million years think that this place looked so nice. Its a dump now. Wonderful to see the history of a "historic" building. Sad it has fallen (literally,its sinking) into disrepair.

Thank you for your comments. It is a tragedy that such a lovely building has been neglected and allowed to deteriorate. And thank you for the update that the Health Dept. is still there!

My mother died there on 3 Feb 1945, after 11 months of hospitalization. Although I wan only 2 1/2 at the time, I remember when Grandma took me to see Mommy. We were walking down the long hallway, which I remember as being deserted. Then my mother came out of her room down near the end of the hall. She was wearing her blue silk robe and had her arms open to me.

My father designed that building. Once when visiting NYC I saw a photo of it at the MoMA.

Thanks for commenting, Mary. Your father has quite the legacy here in Lake County, since he also designed our courthouse.

Your comment made me realize I did not credit him in my post! I will correct that oversight.

This building was designed by my father Mr. Arthur A Hennighausen, Mr. Ganster was his business partner in the firm of Ganster and Hennighausen. This building was however the singular work of my father. Their office policy was that each got their own jobs and the only shared the office expenses. The office was located on the 3rd floor of 222 Washingtonon st. Waukegan Illinois. Their phone number for all the years was On2-2223. Father was given this job and with it he was allowed to design everything such as the light fixtures, chairs. beds. all furnishings inside and out. This building was declared by the Britannica people as the best designed building of the decade of the 1940's and included as such in their publishing's. After this work, father stayed with publicly paid work primarily schools and a few commercial projects as the north Shore Gas office on Grand Ave.; that was awarded the best use of aluminum in the world by Renalds Aluminum for
the year it was completed.

It's a truly remarkable and beautiful building. Thank you for sharing these insights into your father's work. Very much appreciated!

Before I could work as a student dishwasher in the Highland Park High School kitchen in the late 50s, I had to go to the sanitarium for a TB test.

My grandfather was a patient here in 1971. At the time, children were not allowed to visit him and I remember standing outside in front of the buildng below his room. He would toss candy down to my brother and me. Sadly, my grandfather passed away at the sanitarium.

I'm following records that have lead me to believe I may have possibly had a 2nd great grandpa who worked here 'Frank Pekala'. I'm not 100% sure he is indeed related by blood but I'm 99.9999% sure at this point. He listed James o. Parramore Hospital on his WWII draft approximately 1940 out of what I can find so far. My Great grandmother & her family Owned a beauty parlor not too far way from there (Oh and lived right by Michael Jackson!) it would be great to find any more records like that but I enjoy reading about these historical places regardless of the situation that has brought me to look into them!

Do you think Frank Pekala worked at the Sanitorium in Waukegan, Illinois? Or in Indiana? We do not have records for the Waukegan sanitorium, but have some newsletters made by patients. Please email me if you need further assistance.

Thank you for commenting!

My Grandmother passed away here in Feb 25, 1949. I just found this location doing family research, 11/11/2020 and it means a lot. Thank you for sharing the building pics and stories. I was able to see what she saw and be where she was her last days after all these years. Gone but not forgotten Grandmother LaVerne

Diana Dretske is the Curator and Lake County historian for the Bess Bower Dunn Museum (formerly Lake County Discovery Museum). The museum is a department of the Lake County Forest Preserves and nationally accredited by the American Alliance of Museums.
Use of material on this blog must be properly credited and may not be published without written consent. Contact ddretske@lcfpd.org Thank you!
My blog subscription service has changed from Feedburner to follow.it. Previous subscribers have been updated to the new service. New subscribers, please submit your email below.

History of the U.S. Army Post at Fort Sheridan by Diana Dretske available at Amazon and museum's gift shop 847-968-3400.