One of the greatest high jumping horses of all times—Great Heart—made an appearance at Fort Sheridan in the 1920s. 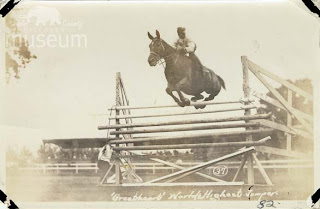 This champion horse has escaped the local history books, but fortunately this photograph survived to document the event.

The snapshot came with a collection of photographs donated to the museum in 1992 by the U.S. Center for Military History out of the former Fort Sheridan museum. The 5 3/4" x 3 3/4" photo has pieces of black photo corners adhered to it from when it was stored in someone's photo album.

Over the years, I have probably looked at this image dozens of times, but recently something made me stop and take a really good look at it. Then I wanted to know more. Well, once you get the bug you've got to do the research!

At the beginning of the 20th century, horse high jumps were an integral part of horse shows. In the Chicago area there were a number of horse shows held each year at Fort Sheridan, Onwentsia Club in Lake Forest, Soldier Field, Chicago Riding Club, South Shore Country Club and so on.

In 1910, the world's record high jump was reportedly set by a horse named Confidense who cleared 8 feet and 1/2 inch at an event in Ontario, Canada.

In 1922, Charles Weeghman's chestnut gelding, Strongheart, won the high jump at the International Horse show in Chicago, clearing the bars at 5 feet 6 inches. That same year, at the South Shore Country Club's horse show, Great Heart cleared the bar at 7 feet 6 inches to win the high jump championship, but failed in his attempt to best the world record. 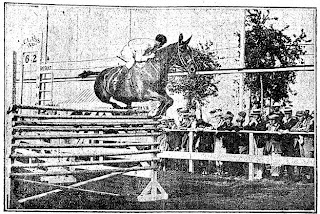 Chicago coal baron and founder of Peabody Coal, Francis S. Peabody (1858 - 1922) had purchased Great Heart as a young colt, and after Peabody's death in 1922, his son Stuyvesant "Jack" Peabody continued to train the horse. Great Heart had an affinity for jumping, especially bars set at 6 feet and above.

Great Heart was entered into the South Shore Country Club's horse show in 1923 with the intent of breaking the world record. On June 8, 1923, Great Heart cleared the mark, becoming the world's greatest high jumper by jumping bars set at 8 feet and 3 inches. 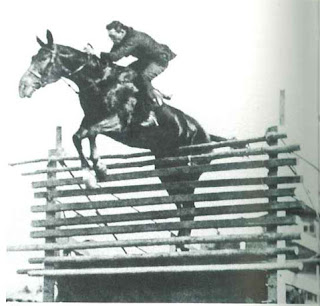 Detail of Great Heart clearing bars set at 8 feet and 3 inches at Fort Sheridan, circa 1923. This must have been a repeat performance for his fans after his June 8th triumph in Chicago. Notice the photographer has written the height of the bars at the right of the photo. BBDM 92.24.1307

Great Heart was retired to the Peabody farm (presumably Stuyvesant "Jack" Peabody's rural farm in Lemont, Illinois) soon after winning the world's champion title. In 1924, the family honored the horse by choosing "Great Heart" as the trade name for the fine grade of coal being mined at Peabody's Mine 30 in Kenvir, Kentucky.

One source claims the world champion high jumping horse is Huaso, a horse ridden by Chilean Captain Alberto Larraguibel, who set the high-jump world record on February 5, 1949, by jumping 8 feet and 1 inch—two inches less than Great Heart's jump of 1923. 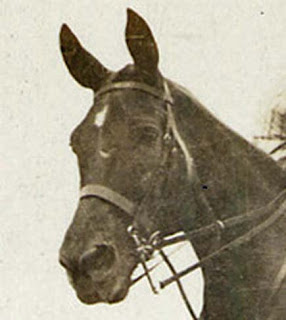 Perhaps someone with more information on these statistics can clarify this. Until then, Great Heart is my world's champion.

Special thanks to Janneke Fowers, Heritage Interpreter, for the Forest Preserve District of DuPage County for additional information and the photograph of Great Heart breaking the World Record.

Thanks for commenting! It's been difficult to find information about Great Heart and all involved in his story.

Amazing. I'll be writing a short story about Great Heart soon--my project is a recovery of lost horse lore.

Great Heart is a hackney horse cross (I believe the other half was thoroughbred). Confidence was hackney or hackney cross too (hackney horse not hackney pony). I've seen the 3rd pic down in an old book that told a little about Great Heart. In that time period, hackney horses and hackney crosses were used commonly because of their incredible hocks and jumping ability. Unfortunately, hackney horses are currently listed as "critically endangered" with only around 2,500-3,000 world wide.

I ran across your blog entry while browsing. I also remember reading about Great Heart as a horse-crazy girl, and especially the third photo. I couldn't imagine how a horse could jump that high -- still can't. Here's a link to some info on C.W. Anderson's book about the horse.

Thanks so much for your comment and the link to the book about Great Heart! I'm ordering one now for the museum's library.
Best wishes!

The Bess Bower Dunn Museum is documenting our community's response to the COVID-19 pandemic. Click this link to the Museum's webpage to share your experiences and photos. Thank you!