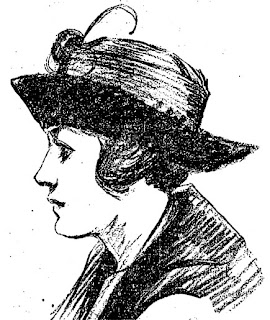 In an age when anarchist bombings were daily news, the capture of 19-year-old Gabriella Antolini for carrying 50 pounds of dynamite and a pistol was a shock to many.

On January 17, 1918, the "Dynamite Girl" (as the newspaper's dubbed her) was arrested at Union Station in Chicago for transporting a satchel filled with dynamite. When questioned, Antolini gave the false name of "Linda José," a character in an anarchist propaganda play, and refused to cooperate with police.

Gabriella Antolini, alias Linda José, (right) as sketched by Maude Martin Evers for the Chicago Tribune. The alias was no doubt a ploy to put authorities off the scent of her accomplices.

Gabriella "Ella" Segata Antolini (1899-1984) was the daughter of Sante and Maria Antolini. The family immigrated to the U.S. in 1907 from Ferrara, Italy. They worked as contract laborers in the cotton fields of Louisiana, before settling in New Britian, Connecticut where they did factory work. When her parents were notified of her arrest, they could not believe it was their daughter, although they were also anarchists.

After her arrest, Gabriella was brought to Waukegan where she was held at the Lake County jail to await trial. While in jail, Antolini planned an escape. She had hidden a milk bottle which she intended to attach to the end of a broom handle and "knock out" the Lake County Sheriff, Elvin J. Griffin. Before she could act, Antolini's cellmate informed the Sheriff of her plans. 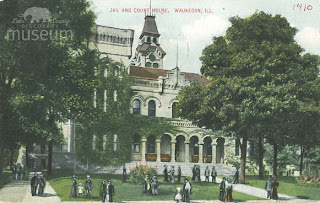 Lake County Jail (courthouse tower behind it), where the "Dynamite Girl" was held for several months in 1918. Dunn Museum 92.27.253.1
After two weeks in jail, Antolini finally revealed her real name and began to tell her story. She admitted to being a sympathizer of the Industrial Workers of the World (I.W.W.), which promoted worker solidarity and the overthrow of the employing class. She was also an acquaintance and follower of anarchist Luigi Galleani, who advocated the use of violence to eliminate "oppressors." From 1914 to 1932, Galleani's followers in the United States (known as Galleanists), carried out a series of bombings and assassination attempts.

On June 1, 1918, the "Dynamite Girl" was released from the Lake County jail when a $15,000 bond was made by wealthy Italian immigrant, Vincenzio DeAngelo of Chicago. In public, Gabriella was presented as DeAngelo's daughter. On June 27th, while walking with DeAngelo and his wife near the family home, he was murdered. Antolini was quoted in the Chicago Tribune: "O, he wasn't killed on my account. It wasn't because he helped me, I am sure."

In October, Antolini went before Judge Kenesaw Mountain Landis (best remembered for expelling eight members of the Chicago White Sox from organized baseball for conspiring to lose the 1919 World Series). Antolini pleaded guilty and was sentenced to the maximum imprisonment of 18 months and a $2,000 fine. 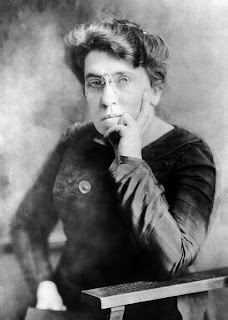 Emma Goldman, 1911. Library of Congress.
While serving her sentence in the Jefferson City Prison in Missouri, Antolini met and befriended Kate Richards O'Hare, a Socialist activist who was imprisoned for an anti-war speech; and most notably Emma Goldman, an anarchist known for her political activism, writing, and speeches. Together, the women were known as "the trinity" and worked to improve prison conditions.

Following her release from prison, Antolini lived in Detroit, Michigan where she met and married Jerome Pomilia, a "fine-man's tailor." Gabriella worked as a seamstress at different shops. Jerome and Gabriella divorced in the 1940s, and Gabriella moved to Florida in the 1950s. 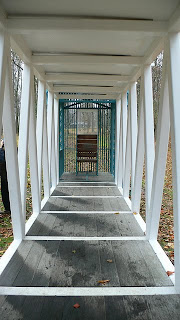 In 1992, Iranian artist Siah Armajani created a tribute to Gabriella Antolini titled: “Gazebo for Two Anarchists: Gabriella Antolini and Alberto Antolini” The interior view (above) shows the wood and steel painted sculpture on display at the Storm King Art Center, New Windsor, NY, one of the world’s leading sculpture parks.

According to Gabriella's son, Febo Pomilia, his mother remained a devoted anarchist until her death from cancer in 1984. She was cremated, and he scattered her ashes in a canal in Everglades Park.

Posted by Diana Dretske at 3:53 PM

Gee, this is nicely put together--thanks!

Thanks -- best Web info on Antolini.
Two questions:
Was the intended use of the dynamite ever disclosed?
Did Antolini stay in touch with Goldman and O'Hare (the other members of the prison "trinity")?

She lived on social security and food stamps for years. So I don't know about devoted anarchist, her son Febo my uncle was a complete jerk.

Wow what an amazing and tough woman!

I am Margo, Gabriella’s granddaughter. My grandmother and I were very close. I wrote my senior thesis at Linfield College about her. There is a lot of inaccurate information about her on the internet. Both Gabi and Emma Goldman later disavowed violence. They remained friends until Goldman’s death, writing each other frequently after Emma Goldman was deported. Gabriella also remained friends with many from the anarchist community until she died. She was held in high regard by them, respected for her gentle strength and generosity toward others, which often left her in straits. She loved to cook, was a prolific reader, and adored her grandchildren.

Thank you for commenting and sharing some of your family's history.

I'm posting this message on behalf of Alexander Carney alexandercarney@icloud.com:

>> I am writing a play about Emma Goldman, Kate Richards O'Hare and Gabriella Segata Antolini during their time in the Missouri Penitentiary. I'd like very much to speak with Margo, her granddaughter. Is it possible for you to reach out to her on my behalf? I'd be very grateful; while there is plenty of material about O'Hare and Goldman, Antolini is much more of a cypher and opportunity to flesh her out would be gratefully appreciated. In many ways, she's the protagonist of the piece and I'd like to know her better.

Thanks in advance for your serious consideration of my request,

I am an independent researcher with both a family and academic purpose. I am writing about the case of my great uncles, Erasmo and Joseph Perretta who lived in New Britain, were associated with the New Britain anarchist group, and were hanged for a murder they most likely did not commit. I am trying to contact "Margo" who wrote her thesis on Gabriella Antolini. I have tried to locate the thesis without success. I am very interested in learning more since the dates of her arrest and my uncles' are the same. She is central to my research. If you have any information or can contact "Margo," please let me know at jeanmoore@verizon.net. ...

Unfortunately, I do not have contact information for Margo. Her comment did not include an email address.

If I can be of more assistance please email me at ddretske@lcfpd.org.

Good luck with your research.

Hi,does anyone know anything about her first husband Augusto Segata? I suspect he was from my village in Italy (then Austria), Sopramonte.

Margo
My grandfather was Nick Piesco. He knew your grandmother well, both from the movement and on a personal level. He ended up in New Britain around 1918, a mile from your great grandparents. I have a few photos. We believe Ella is in at least one of them. Would love to speak to you. Maybe help me fill in some gaps in my family history.