John Robertson and the Tragedy of Rainbow Road

"Nothing in the whole history of Lake County has ever produced a tithe of the excitement which has been developed here over the killing of 'Squire John Robertson' by Peter Davison... The death of one of its most prominent citizens in this manner has called forth such an expression of public sentiment as is very seldom manifested in the rural districts." Chicago Daily Tribune, September 11, 1877.

The cause of the terrible incident was a road dispute. The road to Honey Lake in Lake Zurich (today's Rainbow Road) had been in place some 40 years when farmer, Peter Davison (1826-1892), decided it was too close to his orchard. He petitioned the road commissioners to have it moved. 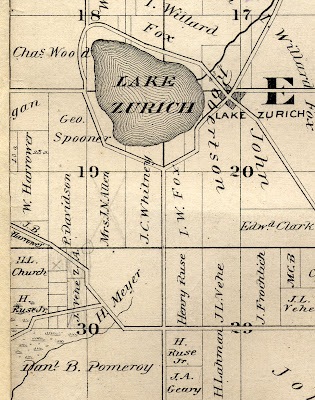 A section of the 1873 plat map (above). The disputed road can be seen on the map beneath Lake Zurich and diagonally under P. Davisons' name, misspelled as Davidson. https://maps.lakecountyil.gov/mapsonline/

For a couple of years preceding the incident, Davison repeatedly blocked the old road with barriers, using logs or fences, and harassed travelers. The Town Supervisor decided the matter was not worth quarreling about and asked that a new road be built, but it would take several months to collect the taxes to build it. In the meantime, the road commissioners needed to remove the barriers for "some road should be kept open."

Road commissioners John Robertson, Mr. Knigge, and Mr. Bees, and hired men met at the road block on September 8, 1877. Davison's barrier was a rail fence with a board fence on top, and a gate secured with a chain and padlock. A hired man took down a portion of the fence before Davison threatened them. Davison and his son, Charles, were carrying clubs, and Davison's wife, Martha, held a fence rail. As the threats continued, Robertson advised the other commissioners to get a warrant for Davison and his son's arrest. The commissioners were tired of the issue and wanted the road open.

One of the hired men was told to continue taking the fence down and the younger Davison hit him with a club. The hired man took the club away and the boy cried out, "I am assaulted" and drew a revolver on him. Robertson then addressed Peter Davison, trying to calm the situation, but Davison, who was holding a revolver leveled it at Robertson and fired. The Davisons fled to their home. 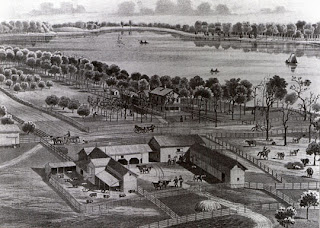 The John Robertson farm on the east shore of Lake Zurich, circa 1860. Robertson was a prosperous farmer and road commissioner.

The bullet from Davison's gun entered through Robertson's chin. Robertson's companions lifted him into a wagon and took him to his home along Lake Zurich. Four hours later, he died from suffocating on his own blood.

Edward Clark, Robertson's son-in-law, went to the Davison home to arrest him. There, he found Peter Davison sitting in his kitchen smoking a cigar. 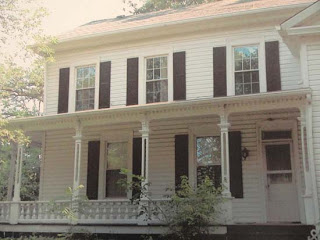 The Charlotte and John Robertson home where John died from his bullet wound. Photographed by Korinna Grom, 2011.

In his defense, Davison claimed the killing was accidental. He stated that while sitting or leaning on the fence at the time, he was thrown forward and the revolver went off in consequence.

Davison and his son (an accessory to murder) were held in jail in Cook County. Davison's hearing was reportedly held in Barrington in a room above the cheese factory. There were so many people interested in the proceedings that the floor began to sag and had to be re-enforced. The Chicago Tribune reported that Davison had two hearings, one before a Justice of the Peace, presumably referring to the hearing in Barrington, and the other on a writ of Habeas corpus before Judge Murphy at Woodstock.

Having been indicted, on December 4, 1877, Davison was called into the Circuit Court in Waukegan. Interestingly, the court session was held at Phoenix Hall, because the county was without a courthouse. In 1875, the courthouse was destroyed by fire, and the new courthouse was not completed until November 1878.

On March 30 1878, after a two-week trial, Davison was found guilty. The jury's foreman read the verdict: "We, the jury find the defendant guilty in manner and form as indicted, and fix his punishment at imprisonment in the Penitentiary for fourteen years."

Davison served a shortened sentence and was released due to poor health. His release may have occurred as early as 1880, since he is listed on the 1880 census as living in Ela Township, Lake County. 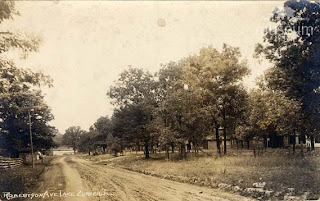 So interesting! Thanks for sharing!