To be "ridden on a rail" was a common form of mob punishment in Colonial America, but curiously, it turned up in the village of Volo in 1913. For those of you not familiar with this term, riding the rail or being run out of town on a rail, was a humiliating punishment in which the victim was made to straddle a wooden fence rail held on the shoulders of men, and then paraded around town and taken to the town limits and dumped.

Generally, it was a man who was ridden on a rail, but in the case of Volo, it was a woman, and women who ran her out of town! 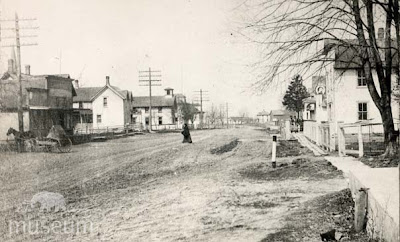 Scene of the "ridden on a rail" incident. Volo's Main Street, circa 1900. (LCDM Collection) Volo is located in western Lake County in the area of Routes 12 & 120. It was known as Forksville until 1868 when the name changed for unknown reasons. 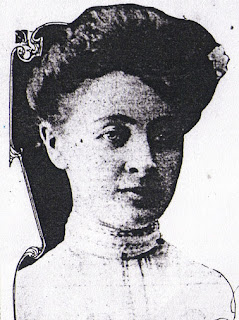 Minnie stated in the Lake County Independent: "They say I went buggy riding with him and left my helpless husband at home. It is a cruel lie. I made two trips to McHenry, Ill., in a wagon to get furniture. He is my brother-in-law and he went with me to help me."

Minnie Richardson (above) as pictured in the "Lake County Independent" on July 25, 1913. 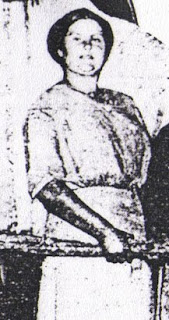 The town's women met about the rumors and decided to take action against the perceived immorality.

It was one of the "captains" of the group, Emma Stadtfield/Stadfield (right), the wife of the town's blacksmith, who went to the Richardson home at dusk to pay a call while the other women hid around a corner. When Minnie came to the door, Emma, who was described in the newspaper as "weighs 180 pounds and is athletic," grabbed her and dragged her to her waiting compatriots.

Emma Stadtfield as photographed on July 24, 1913 for the Lake County Independent.

Emma brought Minnie to the group of about 15 women and one man who immediately started tearing at her dress, and placed her on a twelve-foot fence rail. They carried her a quarter mile (with boys following the procession) to a partially dried pond and jerked the rail back and forth until she fell into the mud. They then kicked Minnie and threw mud at her, all the while taunting her and told her to leave town in 24-hours or they would "apply a coat of tar." In Colonial times, being ridden on a rail was often accompanied by tarring and feathering. 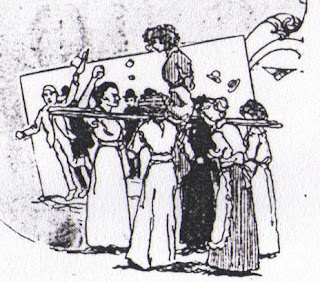 Cartoon of the rail riding from the Lake County Independent, July 25, 1913.

Minnie said in the paper: "So jealous were my neighbors and so peculiar had been their attitude that I had long expected they would do something to injure me—not physically, but in a way that would destroy my peace of mind."

When Minnie had not left town by the following evening, the women reportedly came to her house with a pail of hot tar, but were unable to get inside. Early the next morning, John Richardson "bundled his wife into a rig and drove eighteen miles to Waukegan, where he obtained $1,500 by mortgaging his store." She then caught a train to Chicago to stay with her sister.

Rose Richardson Dunnill, the wife of Will Dunnill, was also one of the women vigilantes. She left town for several days after the incident to "recuperate from the shock of the rail-riding." It was also reported that her husband mortgaged their home to have money to flee to London, England. (William had immigrated from England in 1884). 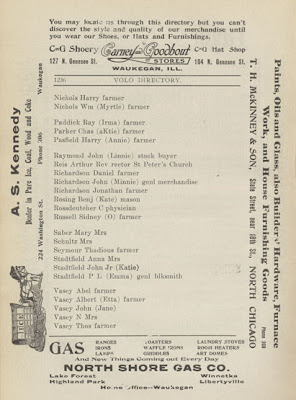 Emma Stadtfield was defiant after the incident. "I'll be right at home when the Sheriff comes," she stated to the New York Times. The story had become national news! "We are not afraid of arrest, and we'll ride Mrs. Richardson on a rail again if she ever shows herself here."

When asked by a reporter if she would return to Volo, Minnie stated: "No, never. I could not do it—they were so mean—it was a terrible place. I am going away and start over. I will ask my husband to come to me."

"Someone will have to suffer for bringing this disgrace on us," said Minnie's husband, John Richardson. The newspaper noted that Richardson was interviewed from his wheel chair from which he was unable to move. "My wife is a good woman. She is the victim of malicious gossip... And to think I was helpless to save her from the indignities heaped upon her."

John Richardson filed warrants against five of the women, the key instigators—Emma Stadtfield, Anna Stadtfield, Mrs. Chris Sable, Alma Walton, and Mrs. Jack Raymond. In October 1913, the "rail party" of five women and one man, Edward Krepel, who had "dressed in the garb of a woman," were indicted by a Lake County grand jury. All but Krepel, who "vanished," went to trial. By December, the women were found guilty of rioting. 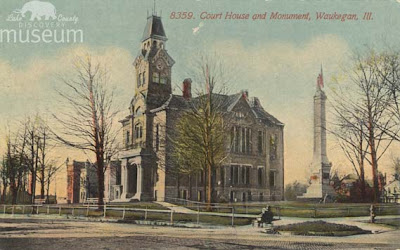 Lake County courthouse where the Volo women were tried for "rioting" in the "riding the rail" trial. Acmegraph Co. postcard, circa 1910. LCDM 61.8.24.

State's Attorney R.J. Dady said in the trial: "They made themselves judge and jury and executioners of this little woman; they took the law into their hands without asking state or our courts to chastise her for any lawbreaking she may have committed... If you permit them, even if they are women, to go free, you encourage acts such as occur in the south and raise resentment in the north."

The guilty were fined $100 each by Judge Charles Donnelly of the Circuit Court of Waukegan. The Judge also censured the women, saying that their sex alone saved them from receiving the maximum penalty of a $300 fine and six months in jail. The newspapers also noted that four of the women convicted were grandmothers.

What became of the people involved in this criminal incident?

Emma Stadtfield and her blacksmith husband, Peter, remained married and in Volo.

John and Minnie Richardson divorced. In 1920, John is listed as divorced and renting a home in Avon Township, Lake County, and died the following year. Minnie went to live in Chicago. It's possible the $1,500 that John gave her was part of the marriage dissolution.

William and Rose Dunnill also divorced. On November 1, 1916, William Dunnill and Minnie Schultz Richardson married in St. Joseph, Berrien, Michigan seeming to confirm the rumors that sparked the Volo women's fury three years previously. They were married a second time on March 12, 1920 in Chicago, Illinois. They were married for 38 years.

An entry from the Michigan marriage book for William Dunnill and Minnie Schultz, 1916. 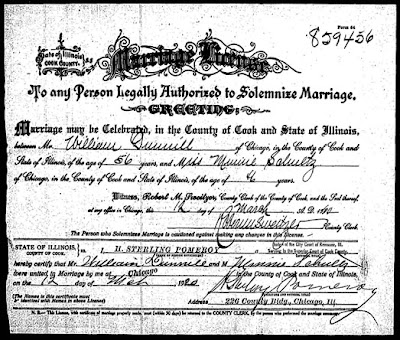 John Richardson summed up the actions of the vigilantes: "It was an act of middle age barbarism and hardly worthy of women of Illinois who have just obtained the right to vote." On June 26, 1913, the State of Illinois had approved women’s suffrage.

Special thanks to Heidi Steeves who brought this sensational story to my attention, and provided newsclippings and marriage certificate.

What a great story! Thanks for sharing it.

Boy, I love Google. John and Rose Richardson are the siblings of my great-great grandfather, William Richardson. Just this morning I received several articles from another person related to this family. I am grateful to have an even more complete picture of the story. Some time ago, I had a comment on my family tree regarding William Dunnill and Minnie Schultz, indicating that they were married twice. The first time in 1916, in St. Joseph, Michigan, and then again in Chicago in 1920. There is definitely still more about this story yet to uncover. Thank you again for posting this fantastic and dramatic glimpse into my family's past!

Thanks so much for you comments, Rox! I agree, this is a story that has more to reveal, and gets more and more interesting. It's like that old adage: Life is stranger than fiction.

What a great piece of history to have memorialized. Thank you for sharing.

Mrs Peter statfield was my fathers aunt. He spoke of the “incident”many times over the years. I do remember her, she was a big lady and I was always afraid of her when we would visit them in round Lake, and remember his blacksmith shop. I do have pictures of it and will be hoping to share pictures with the lake county museum. Ruth Phannenstill Granger

Hello Ruth,
Many thanks for your comments! It's so interesting to hear your impressions of your aunt. We would be grateful for any photos you wish to share.
You may contact me directly: ddretske@lcfpd.org
Best wishes,
Diana