The Browe School was named for English-born, William Browe, Jr. (1814 - ?), who gave the land for the school. The school was in operation from circa 1850 - 1960, and located east of the Tollway in Newport Township between Dilley's and Mill Creek Roads. 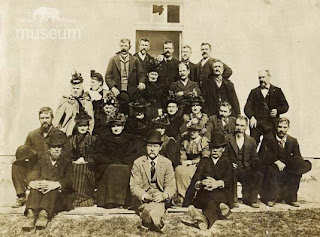 The Annual Browe Reunion was known county wide. The first one was held in 1877, and held each year on the second Thursday in August in which every teacher and pupil of the school was requested to attend.

The first school in this district was a log building, constructed prior to 1850. Its exact location and name is unknown, but it was the predecessor to the Browe School.

From 1850 to 1858, parents paid 2 cents for each day their child attended school, and supplied one-fourth of a cord of wood for each of their children. Teachers who taught in the "cabin school" included Mrs. Richardson and Hamilton E. Ames (1828 - ?), the latter arrived in Lake County from Pennsylvania with his parents and siblings prior to 1850. 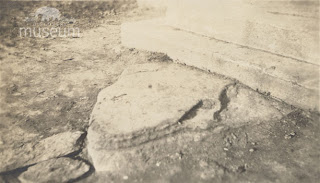 Photo of "large flat rock" from the site of the first school, a log structure. After the first school burned one night, the cause was never determined, the rock was used as a stepping stone for the next school. Students in 1918 noted, "We step on it just as those old people of the 'early times' did." (DUNN MUSEUM 2003.0.36) 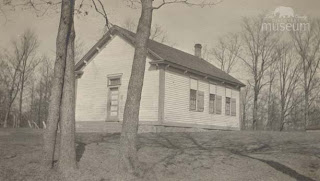 The second school in the district, (above) and the first to be named Browe School, as photographed circa 1918. DUNN MUSEUM 2003.0.36. This wood frame structure was constructed by Mr. Gaude on a portion of the William Browe Jr. farm in 1859.

In 1817, William Browe, Jr.'s family fled from England to the U.S.. Browe's father was a minister in the Methodist Unitarian Movement and upon the suspension of the Habeas Corpus Act in June 1817, Browe fled to America in order to escape arrest. William Jr. came to Lake County in 1858, and leased the use of his land for school purposes on January 26, 1859. It was common for farmers to donate or lease a parcel for schools, often stating that if the land ceased to be used for school purposes it reverted back to the family. 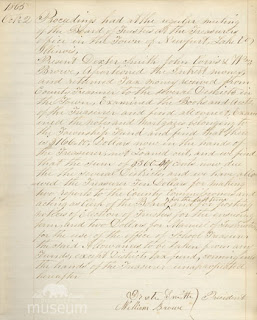 Browe School Board minutes from October 1865. William Browe, the farmer who originally leased the land for the school, signed the minutes along with the Board's president, Dexter Smith. (DUNN MUSEUM 74.20.15) In October 1863, William's younger brother, Alfred Browe (1821-1896), arrived in Lake County and bought William's farm where the school was located.

As early as 1864-65, while Miss Laura A. Heath (1844-1925, later Mrs. Alfred L. Browe) taught at the school, there were five blackboards, and a map and globe of the world. However, the boys preferred to use the globe for their football games rather than for studying geography. 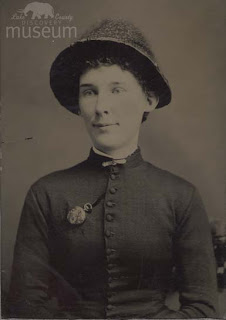 Miss Mary N. Browe (1860 - 1952) (above) was a student and then a teacher at the Browe School. Mary came to Lake County with her parents Alfred & Harriet Whittaker Browe, from Newark, New Jersey in 1863. Her father bought the farm where the school was located. Mary taught over a period of 18 years, and was "said to be the best and best liked teacher Browe School ever had." Tintype photograph of Mary N. Browe, circa 1880. DUNN MUSEUM 2003.0.36. 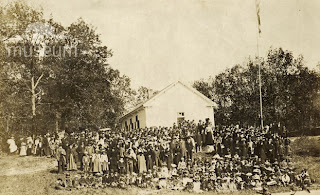 In 1893, a flagpole and flag raising was held at the school. The money for the flag and flagpole was raised by the school's Young People's Literary and Debating Society. Photo of flag raising ceremony at Browe School, 1893. DUNN MUSEUM 2003.0.36.

Beginning about 1918, schools throughout the county were remodeled or rebuilt with brick. This was part of the modernization of rural schools to provide good lighting and heating systems required by law. A brick school was built for the Browe School around 1920. This school was in use until circa 1960. Two years later it was sold for a private residence.

Information for this post came from census records, and photographs and information from the Browe School History completed by Browe School students, Maudess Ames and Irene Leable. The history was done as part of a statewide celebration of Illinois' centennial in 1918.

Very interesting presentation. At the Newport Township Historical Society we are in the process of scanning the hand written book from 1918 on the history of Wadsworth Town and school that was presented to the school superintendant. We also have numerous photos and newspaper articles from Browe school and the many reunions that were held, and also an audio interview of the lady that converted Browe school into a house.