While cataloguing a portion of the glass negatives in the museum's collection, I came across a view of the People's Drug Store in Waukegan with James Pridham standing in the doorway. The image (below) intrigued me enough to do research on the store and Pridham. It turned out to be a very worthwhile endeavor, leading to a couple of discoveries, including the identity of the second man in the photograph. 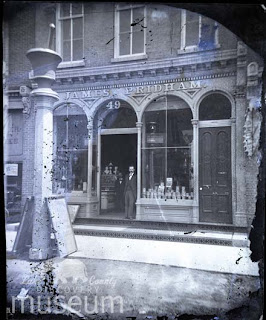 Pridham worked as a manufacturing chemist. In the Waukegan Business Directory for 1874, he is listed as working at the People's Drug Store on Genesee Street along with James McClasky, Jeannette's brother. 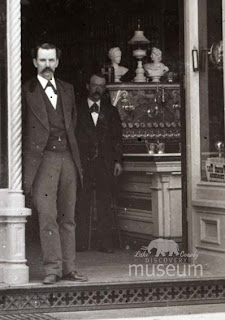 Detail from glass negative, circa 1875, showing James Pridham leaning against the door to the People's Drug Store. (LCDM 2011.0.191)

Based on the business directory listing and further research on Ancestry.com, which turned up a photograph of McClasky and his obituary, the man standing behind Pridham is more than likely James McClasky (1844-1916).

According to McClaskey's obituary, he arrived in Waukegan in 1874 and worked as a druggist for two years (1874-1876). This time frame subsequently dates the glass negative to about 1875. The obituary also states that he established a drug store on Genesee Street. This claim is contrary to historical facts, including that it was James Pridham's name over the entrance to the drug store, and that the People's Drug Store was in business well before 1871 when Pridham arrived from Canada. 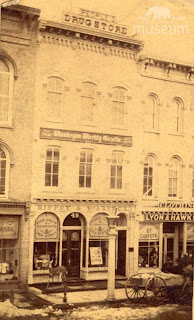 Carte-de-visite photograph of the People's Drug Store, circa 1865. Note the druggists' names over the entrance "Rippey & McArthur." LCDM Collection. 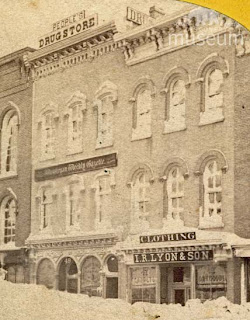 People's Drug Store next to I.R. Lyon's General Store on Genesee Street, Waukegan. This view is from a stereograph taken the winter of 1871. LCDM 94.14.61

James Pridham developed a product called "Japanese" for removing "grease, dirt, etc. from clothing, glass or wood; the only preparation of the kind in the world, that will positively do all that is claimed for it." He is also listed in Haines' history of Lake County as the "Proprietor of Pridham's celebrated 'Japanese.'"

By 1876, James McClasky moved east with his wife, Sarah Louise Smith. In 1893, he returned to Waukegan and opened a hardware store.

By spring 1878, the Pridham family left Waukegan for Maywood, Illinois. This short stay in Waukegan (1871-1878) can make researching an individual immensely difficult, especially when, like Pridham, he was not present for the 1870 or 1880 census. However, the fantastic glass negative of Pridham and the People's Drug Store, the Pridham product bottle, and 1874 Waukegan Business Directory all document his time in Waukegan. Additionally, historian Elijah Haines included information on Pridham and his "Japanese" product in his Lake County history of 1877.

But the Pridham story does not end here. James and Jeannett's son, Edwin S. (1881-1963), made a place for the name Pridham in American history as the co-founder of Magnavox.

Edwin was born in Maywood, Illinois, and by 1910, after receiving his degree in electrical engineering from Stanford University, was living in Sacramento, California. James and Jeannette Pridham were living in Los Angeles. 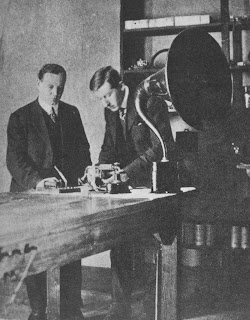 Around 1910, Edwin Pridham met Peter Jensen, who was building a radio station in Sacramento. Pridham helped Jensen (a Danish immigrant) learn English and American history, and in 1911, they moved to Napa to start their own research laboratory. Photo of Edwin Pridham (left) and Peter Jensen in their Napa lab.

In 1915, they debuted their invention of a public address system and loudspeaker named the "Magnavox," and formed the Magnavox Company with the Sonora Photograph Corp.

What started out as an attempt to further identify a glass negative of James Pridham and the People's Drug Store turned into a real discovery. I was able to follow the Pridham line to Edwin S. Pridham, co-founder of Magnavox, and to identify the second man in the glass negative as James McClasky, a Waukegan druggist and hardware store owner.

Special thanks for additional research assistance from Beverly Millard of the Waukegan Historical Society's research library, and Al Westerman, volunteer for the Lake County Discovery Museum.

Did you use a special computer program to get the image from the glass negative, or did you have to make photographic prints?

I used Adobe Photoshop and an Epson scanner that allows the scanning light to shine through negatives. The glass negative was scanned at 600 dpi in order to enlarge the image to get the great detail of the gentlemen in the doorway. At a lower resolution, I wouldn't have been able to zoom-in as clearly on the details.

Thanks so much for this article!
I have been involved in tracing my family's genealogy. Edwin is my second cousin twice removed through Jeanette McClasky.

Good to hear from you. So glad you found my blog about your second cousin.