You may have seen Ronald McDonald in the news this week as he met with a collector of Happy Meal toys. The occasion? McDonald's is celebrating the Happy Meal's 30th anniversary.

In 1977, Dick Brams, a McDonald's Regional Advertising Manager, commissioned the first Happy Meal and called it McDonaldland Fun-to-Go. The "Fun-to-Go" part of the name was because its mission was also to promote the new drive-through window service that was being introduced.

Two years later, the kids' meal was rolled out nationally with a Circus Wagon Train theme. The toy prize that came withe the meal became the key to its success and changed the way children ordered food. 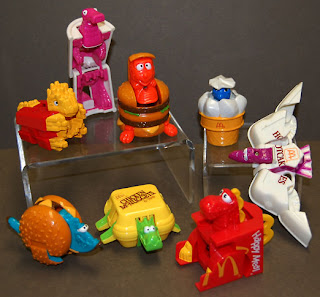 In 1991, the museum accepted a set of eight McDino Changeable Happy Meal Toys into the permanent collection (above). It was an unusual addition to the tens of thousands of objects in the museum's care, especially since the toys did not have a significant relation to Lake County. However, they complemented the museum's advertising doll collection. Photo by Deanna Tyler 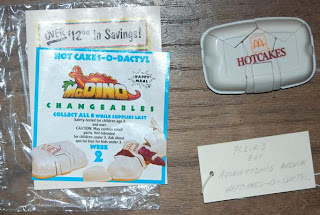 Each toy is shaped like McDonald's food items and unfolds or transforms into a different dinosaur. The McDinos were donated with their original packaging as shown in this photo. 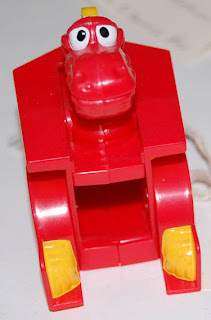 What was initially meant for children and to draw young families to the restaurant, quickly became collectibles for adults.

To date, billions of meals and toys have been sold, and the toys and the Happy Meal packaging serious collector items. The cheap trinkets of the early Happy Meals have been gradually replaced with increasingly sophisticated toys, many of which are a tie-in to some existing toy line or motion picture.

Diana Dretske is the Curator and Lake County historian for the Bess Bower Dunn Museum (formerly Lake County Discovery Museum). The museum is a department of the Lake County Forest Preserves and nationally accredited by the American Alliance of Museums.
Use of material on this blog must be properly credited and may not be published without written consent. Contact ddretske@lcfpd.org Thank you!
My blog subscription service has changed from Feedburner to follow.it. Current and future subscribers to the Lake County History Blog will receive new post notices from follow.it. New subscribers, please submit your email below.