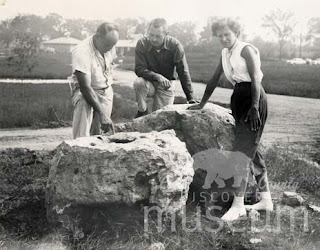 Photographed with the rock split in two are Raymond Caldwell, Robert Vogel and Mrs. Caldwell. Raymond Caldwell points to a fossil in the rock excavated on the site of his family's new home. Photo taken in September 1957. (LCDM Photo/Vogel Vol. 2)

The discovery set off a media whirlwind, opening people's eyes to a time when this entire region was part of an ancient sea.

Robert Vogel, who founded the Lake County Museum of History in Wadsworth in 1957, (a forerunner of the Lake County Discovery Museum), acquired the rock for the museum’s collection. Vogel ambitiously collected artifacts to represent different eras in Lake County’s past, and the fossil rock was quite a coup, since it attracted national and international attention. 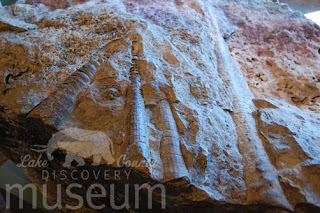 The fossils embedded in the rock include small rounded shells of lampshell brachiopods, and the long pointed shells of kronoceras and orthoceras, two types of cephalopods (“head footed”). Cephalopods are the ancestors of today’s squid. 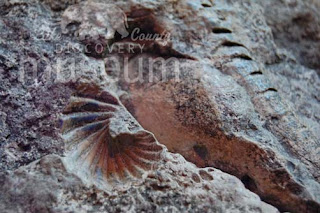 Shell and cephalopod fossils on fossil rock. Photo by Dretske.

American interest in fossils and dinosaur bones began in the early 1800s. As a young nation, the United States struggled with its national identity. With no ancient history or man-made monuments to brag about, it took exploration of the continent to reveal a wealth of “larger than life” natural wonders: the Grand Canyon, Niagara Falls, giant Sequoia and Redwood trees, and dinosaur fossils. These discoveries inspired giant-sized legends such as Paul Bunyan and Babe the Blue Ox. The discovery of the 420-million year old sea creature fossils, put Lake County on the “larger than life” map. 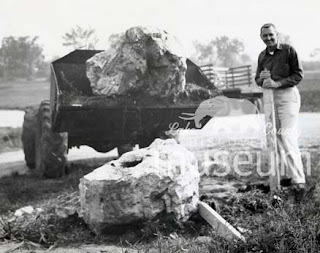 Thanks to Bob Vogel, the fossil rock became part of the museum's permanent collection and has fascinated museum visitors for many years. It is currently exhibited in the museum's Lake County history gallery.

Posted by Diana Dretske at 1:39 PM