I'm on the fence about this Sunday's big game between the Chicago Bears and Greenbay Packers. Actually, on the fence. I live on the Illinois Stateline, and Wisconsin is across the street.

To keep things nice and neutral, I thought I'd share some football images from the Lake County History Archives. 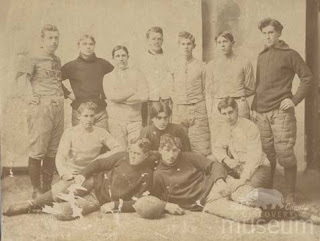 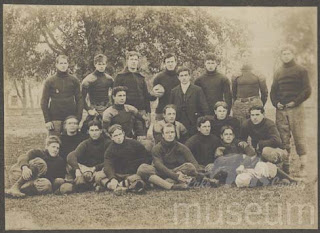 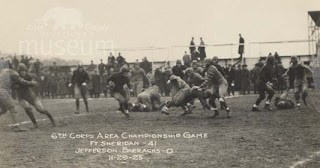 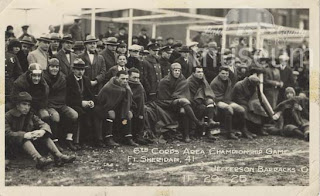 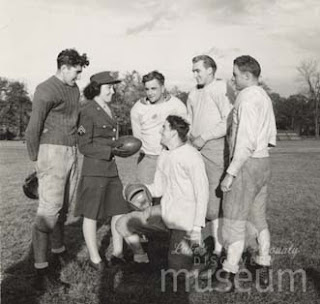 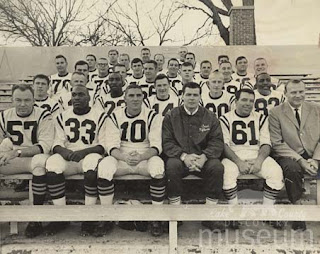 Bob Amann, a lifelong Lake County resident and newspaperman, co-founded the Lake County Rifles, a semi-professional Central States Football League that played from 1965 to 1972. Thanks to a generous donation by Amann's children, the museum now has an extensive collection of Lake County Rifles photographs, programs, newsclippings, trophies, and memorabilia. 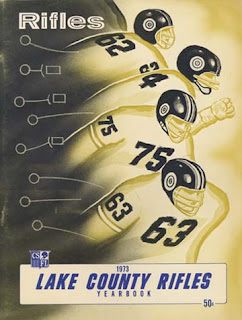 You may have seen the Rifles play at Weiss Field in Waukegan or Carmel High School in Mundelein. Rifles' program, 1973. LCDM 2010.28.14

Are you able to tell me which high school did the Lake County Rifles attend during the years of 1946-1949 ?

The players were from all over, and did not necessarily grow up in Lake County.

To find which high school individual players may have attended in Lake County, I would need the player's name, and then yearbooks would need to be checked at various archives.

Is there someone in particular you are looking for?

WOW….how nice to see someone remembers. I played for the Rifles in 66 and 67. Many/most of the players lived in Iliinois but you're correct, they came from all over. I would drive from Racine for the 2 weekly practices and the Saturday night games were primarily played in Wisconsin and Illinos. We were paid almost nothing, but the Saturday dinners were good and we loved the game.

Thanks for commenting! It'd be terrific to have you look at some of the Rifles photos in our collection and identify the players. If you'd like to, please email me at ddretske@lcfpd.org.

Nice post! As a Bears fan, I really enjoy getting more information on american football history

Hello. Not sure why this was on my mind. My dad played for the rifles. I sure enjoyed going to the games. He’s still alive and perhaps he can identity some of the players. I’ll email Diana if she’s still there

Please do email me ddretske@lcfpd.org. That would be wonderful! Thank you.

My uncle is Bob Amann. In the early 70's he asked me and his son, Terry, if we would like to help out team. Being 12 years old, i jumped at the chance. Did everything from cleaning cleats between plays, handing out water to laying out uniforms before the game. My most vivid memory is the craziness in the locker room after we won the championship. Just an amazing experience. The names of all players escape me. I do remember Tony Bertuca though. I believe he was a linebacker or defensive end. Loved watching him play. Just wonderful memories.