In October 1899, President McKinley (1843 - 1901) stopped at Waukegan on his way East, traveling on the Chicago & Northwestern Railroad. 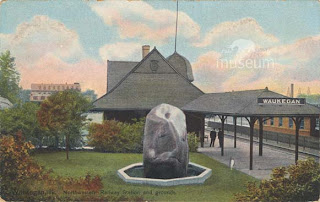 The Chicago & Northwestern Railway Station in Waukegan as it looked about 1910. The railroad had transported the ten foot-tall boulder in this postcard view from near the Lake Koshkonong reservoir in southern Wisconsin. It was placed at the depot at the foot of Washington Street as ornamentation about 1910. The boulder was removed about 1925 to make way for a station expansion. A similar boulder was placed by the railroad at their Kenosha station and is still there. LCDM 61.8.125.

According to the Chicago Tribune, "Several hundred school children, each with a flag, were in the crowd that greeted the President at Waukegan. They were even more enthusiastic than the older and stronger lunged auditors." 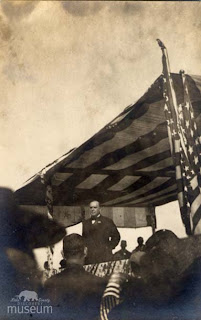 The President's address was devoted almost entirely to the situation in the Philippines.

After defeating Spain in Cuba and in the Philippines in 1898, during the Spanish-American War, the United States needed to determine what to do with Spain’s former colonies (including Cuba, Philippines, Puerto Rico).

McKinley said at Waukegan, "Some people say the President is carrying an unholy war in the Philippines, an unholy war to uphold the holy banner which these children carry in their hands." According to the Chicago Tribune these words were "a signal for great cheering and waving of flags on the part of the children."

The anti-imperialists, felt the U.S. should promote independence and self-rule for all people, and retaining the Philippines went against the reasons we had fought Spain.

In the end, the Senate voted to annex the Philippines. In turn, the Filipino rebels, led by Emilio Aguinaldo, who had fought alongside Americans in defeating the Spanish, now turned against the Americans and waged a bloody insurrection—the Philippines Insurrection or Philippine-American War (1899-1902). 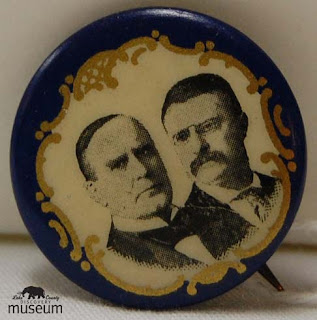 In 1900, McKinley ran for a second term as President with Theodore Roosevelt as his Vice President. Worn by Ann Kelland Carfield of Avon Township, Lake County, IL (1822-1912). Made by the Whitehead and Hoad Company. LCDM 2006.4.40.

President McKinley explained that "... there was nothing left for us to do but to take them all, and to educate the Filipinos, and to uplift and civilize and Christianize them," though the Philippines had been Christianized for centuries.

Interesting. Is McKinley Avenue in Waukegan so named for him, as well?

Yes, McKinley Avenue in Waukegan is named for President William McKinley, whose second term beginning in 1901 was brought to a sudden end by his assassination.