Deck the Fort with Boughs of Holly 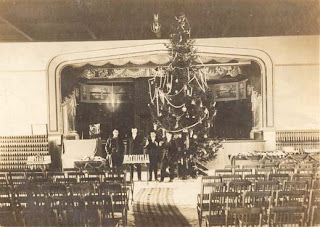 It's no surprise that the U.S. Army Post at Fort Sheridan had a bounty of decorations at the holidays. It was home to military families, and a home away from home for many servicemen and women.

In this circa 1914 photograph, Building 47 is festooned with a Christmas tree and what appear to be gifts. The haphazard way in which the tree is decorated looks like someone threw a roll of toilet paper at it, but the garland may be a string of popcorn. Note the dumb bells and pins on the racks on either side of the stage, an indication of this building's dual use as a gymnasium and theater. 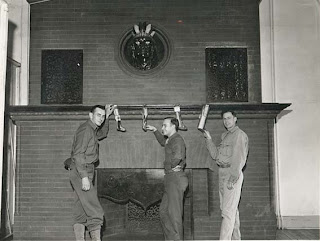 "The stockings were hung by the chimney with care, In hopes that St Nicholas soon would be there." Excerpted from Clement Clarke Moore's poem 'Twas the Night Before Christmas.

Minimal decorations for the Signal Corps in the midst of the war in 1944. Standing with their Christmas stockings in Building 33 are from left to right: William Quada, Harold Foust, and Richard Freeman. This building served as a stockade from 1890 to 1970 when it became the Post Museum. 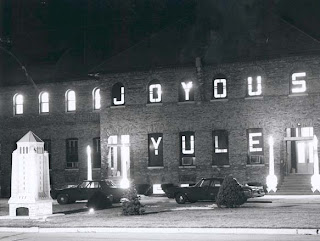 Decorations at Building 48, circa 1965. This building flanks the Fort's 169-foot Tower, and was constructed in 1890 as barracks, and later was used for Lovell General Hospital and headquarters' offices. The miniature replica of the Tower in the photograph was used on parade floats. 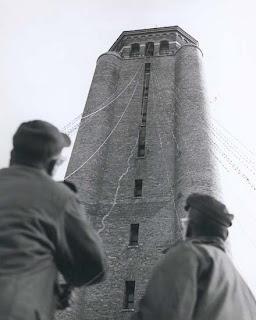 Soldiers putting up the holiday lights on the Tower, December 8, 1965. 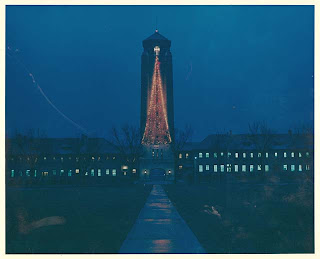 The results of the all the hard work. A colorful light display, highlighting the Fort's most prominent architectural feature.
Posted by D_Dretske at 10:28 AM