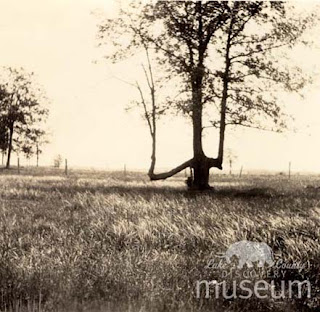 Native Americans populated this region into the 1830s. Potawatomi, Chippewa and Ottawa peoples navigated through a vast network of trails by marking those trails with road signs known as trail trees. Also, waterways such as Lake Michigan and the Des Plaines River were used as thoroughfares. Above is a trail tree photographed in the early 1900s by local historian, Bess Bower Dunn, along Waukegan Road west of North Chicago.

Trail trees were used along Native American foot trails to direct travelers to neighboring villages, and hunting and ceremonial grounds. The unusually shaped trees essentially “pointed” the direction the traveler needed to go. Typically trail trees were oak or elm since they lived much longer than other types of trees.

Bess Bower Dunn (1877-1959), researched trail trees at the turn of the 20th century, writing: “[They] marked routes or trails… by taking a small sapling, bending it to the ground, fastening it, taking off the lower branches or twisting them around the trunk… so the forests of Lake County… became penetrated with a network of trails… marked by trees." 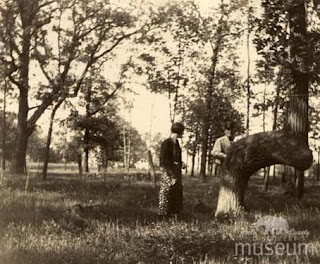 In this photo from circa 1935, a curious local has taken a taxi cab ride out to a trail tree site. The location was in Warren Township, the area of today's Park City, west of Route 41 and south of Washington Street. 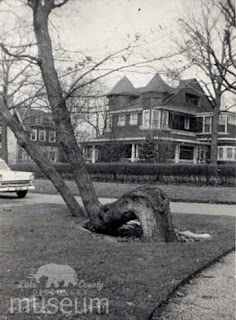 Dunn also noted that "Some of the early settlers recognized these bent trees as landmarks of importance and made an effort to preserve them; others considered them deformed and cut them down.” Officially, there are only two trail trees that still exist in the county--in Deerfield and Zion, although locals continue to report finding trail trees in their backyards and area woodlands. The photo at right was taken by James Getz on Hazel Avenue in Highland Park in 1957.

The United Nation of Potawatomi, Chippewa and Ottawa sold their last remaining Great Lakes land to the U.S. Government in the Treaty of Chicago on September 26, 1833. Lake County's current road system is based largely on native trails though paved over and in some cases straightened. Milwaukee Avenue, Fairfield Road, Greenbay Road, and Belvidere Road are a few of the former trails still in use today.
Posted by D_Dretske at 3:20 PM

I enjoyed the photos, and the commentary. Yes, there are still a few of these trees in existance.

There is a group called the Mountain Stewards who are actively engaged in documenting and preserving these trees. You can learn more about them by visiting their site: http://www.mountainstewards.org or by visiting the bent tree forum at http://www.ahgweb.com/trailtrees.

I also find these trees to be very interesting. There is actually a large sculpture of a trail marker tree in front of the lake county museum (I am surprised it was not mentioned in the article since the author works for the museum...)The sculptor (Dennis Downes) is also a researcher and has a very informative website:
www.greatlakestrailtreesociety.org

IN HIGH SCHOOL, I USED TO STUDY AT A TRAIL TREE ( DID NOT KNOW IT WAS)IN THE WOODS IN DEERFIELD, IL. IT WAS PERFECT TO SIT IN AND PUT MY BOOKS AND WRITING PAD ON THE HUMP, WHICH WAS SHINY, LOOKED WORN AND ALMOST VARNISHED. I BELIEVE IT IS NOW IN SOMEONE'S BACK YARD NORTH OF BRIARWOOD VISTA SUBDIVISION.

I remember one in Evanston just off Green Bay road.

There is/was one in Libertyville where Rockland Road meets with park avenue east of town; there was a plant nursery; I haven't looked since about 1968,

I remember this tree too. It was accessed by the trail at the back of King’s Cove off Deerfield Rd.

There was one at Exmoor Country Club in Highland Park. It was in a wooded area not from the caddy shack.