In 1875, the county’s first permanent courthouse (built in 1844) was destroyed by fire. Funds to replace the building were not available, and it was two years before construction began on a new courthouse. 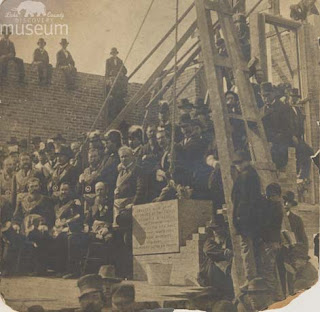 The contract for the next courthouse was signed in August 1877. The laying of the cornerstone (above) probably took place in the fall of that year.

The courthouse was completed in November 1878 for a cost of $45,000. It was designed by H.C. Koch and Company of Milwaukee, Wisconsin, and built by William Price and B.F. and J.B. Porter. This building was made of cream-colored pressed brick and had a slate roof, gray stone trimmings and basement, a clock tower and a cupola. 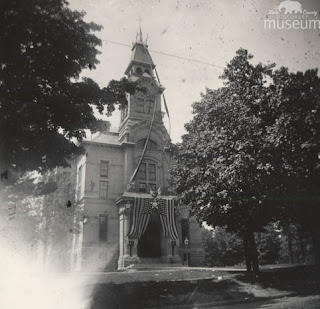 This image (taken from a glass plate negative) may be from the new courthouse's dedication in 1878. The American flag bunting has an emblem of Abraham Lincoln at the center. 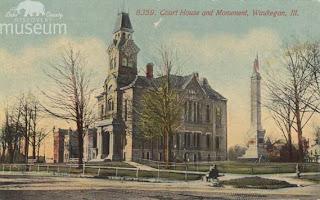 The new courthouse with its beautiful design became a popular subject on colorized postcards. This postcard (circa 1910) shows the courthouse park. Note the county jail (built 1895) partially hidden on the left, and the Soldier and Sailor Monument (dedicated 1899) at right. LCDM 61.8.24. 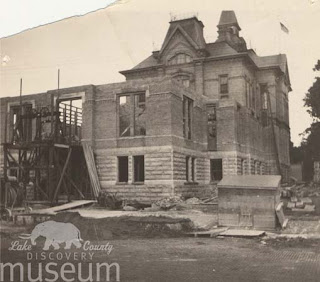 In 1922-1923, a large addition was constructed onto the county building to accommodate the county’s growth. 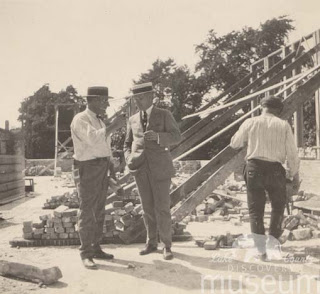 Incredibly, in 1955, there was another courthouse tower fire. This one was started by workmen repairing the 1878-three-faced-clock, which had been inoperative for months. When the workers tried to start the clock's motor it triggered a short circuit in the electrical junction box, apparently causing the fire, resulting in $25,000 damage. Fortunately, the fire was contained to the tower. Photo of firemen climbing more than 100 feet to fight the blaze in June 1955.

The tower was not rebuilt, perhaps with good cause, but probably for fiscal reasons. The bell was removed and temporarily stored at the Lake County General Hospital, before being put on permanent display outside the Lake County Sheriff's Radio Department on Milwaukee Avenue in Libertyville. 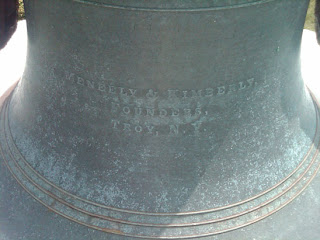 By 1958, debate began about building a new courthouse. The 1878-structure was no longer large enough to house the county's employees and records, in many cases staff were working in hallways and closets. 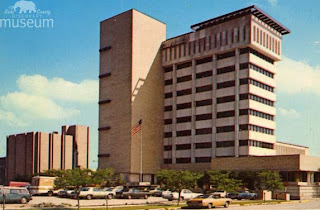 The County Board eventually voted to allocate $11,500,000 to build a modern courthouse. The International style building was designed by Ganster and Hennighausen. The building was completed in 1968. 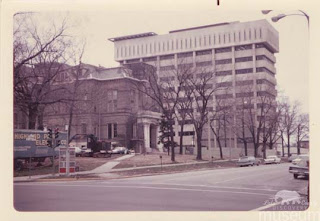 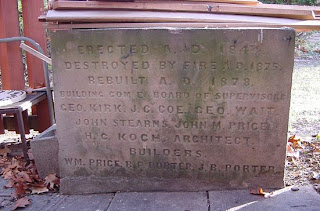 Within the last year, a number of county departments have moved from the Waukegan courthouse into a new Central Permit Facility on Winchester Road in Libertyville. Although, this new facility does not host county board meetings or the courts, it does bring the county full circle to Libertyville where the county's offices were first located in 1839.

This is a fascinating post. I did some research into the old courthouse a couple of years ago, but didn't turn up as much detail as you have here. Many thanks for putting this together.

Just a brief note to say that Chicago gangster John Torrio, Al Capone's mentor, whom some regard as the founding genius behind the American crime syndicate, was given a one-year term for bootlegging. He had been slated to serve his time in Cook County, but after he was shot in an assassination attempt his lawyers pleaded with the judge to let him serve his time in Waukegan, where he received special treatment from the sheriff, who regularly invited Torrio and his wife for supper and allowed him such privileges as the use of a phone, unlimited mail, and special furnishings, including metal shutters to protect him from snipers. While in Waukegan Torrio announced he was quitting the rackets and handed the entire Chicago operation over to Capone, his second-in-command. Torrio was released in late 1925, and after a brief retreat to Italy, moved to the New York area and served as a kind of criminal elder statesman, persuading feuding gangs to establish a national commission in an arrangement that exists to this day.

Thank you for your note and contributing this little known history.

Some years ago, I did an article for the Daily Herlad about this, here's an excerpt:

While in the Lake County jail, rumors circulated that the real reason Torrio was there was due to a friendly relationship with the Lake County Sheriff, Edwin Ahlstrom. Supposedly, Ahlstrom was granting special favors to Torrio such as providing his cell with throw rugs, an easy chair, radio and a down mattress, and catered meals. It was even suggested that Torrio spent time relaxing on the front porch of the Sheriff’s residence, and was as well known on the streets of Waukegan as its mayor.

On hearing these accusations, Torrio offered a $10,000 reward to anyone who could prove the charges. Efforts were made by newspaper reporters to catch him out of jail, but no one was able to prove it.