When settlers began making Lake County their home in the mid-1830s, they traveled on Native American trails, or on the only road through the region—the Greenbay Military Road, established in 1833.

New roads were established according to the guidelines in the Illinois Road Law of February 1841. A new road, or alterations to an existing road, required a petition to be submitted to the County Commissioners Court (predecessor of today's County Board of Commissioners). The petition required the signatures of at least 35 voters residing within 5 miles of the proposed road.

If the petition was accepted, three "viewers" were appointed by the court to lay out the road. A report was brought back to the court for final approval or denial.

The Road Law required the service of all voters between the ages of 21 and 50 to help lay out and construct the roads. Before you picture hardy pioneer women out there with their shovels and wheel barrows, remember that until the passage of the 19th Amendment in 1920, only men could vote. (As an aside, on June 26, 1913, the State of Illinois approved women’s suffrage, giving women the right to vote in state elections). So, the Road Law only required the service of men. This was necessary since funds were not available to hire road laborers.

A rare example (above) of a summons for road service, addressed to Alfred Peats of Chicago, 1849. "Appear at 7 o'clock, A.M.... with a shovel, for the purpose of laboring on the Streets and Alleys..." I suspect Lake County used a similar form. (LCDM Frank Peats Collection 94.5.15)

If a man could not perform the work, he could pay $1 for each day of service that was assigned to him. In Lake County, road service lasted for 2 days, but was increased to 5 days in 1845.

One example of an early road improvement was Lake Road (now known as Sheridan Road for General Philip Sheridan) which was approved by the McHenry County Commissioners Court in 1837. (From 1836-1839, Lake County was part of McHenry County).

In 1841, Lake Road became a state road and was widened to four rods (66 feet). Over the years, the road has been improved and the route altered, but much of today's Sheridan Road in Lake County, follows the original route of Lake Road. 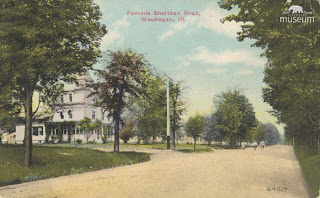 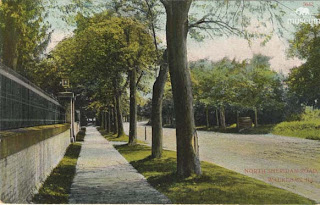 Sheridan Road became known for the beautiful homes and tree-lined scenery along its route, and its meandering path.

This postcard of North Sheridan Road in Waukegan was collected by Lizzie Schlager Wandel of Waukegan about the time of its printing in circa 1910. By then, communities had funds to hire road laborers and no longer used "voters" for road service. (LCDM 61.8.167)
Posted by D_Dretske at 1:32 PM