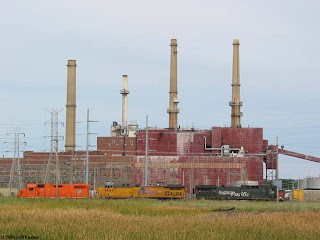 The Waukegan Power Plant is located a mile north of Waukegan on the Lake Michigan lakeshore. It is a coal burning electric generating facility operated by the Integrys Energy Group.

EJ&E Railroad engine 703 (above) leads a UP coal train to the Waukegan Power Plant photographed by Jeff Easton in 2007 and posted on Railroadforums.com

Until recently, fishermen were allowed to use the pier near the plant. The power plant uses water from Lake Michigan to cool the steam used in the generating process. The water is returned to the lake via a discharge channel, and is warmer than the lake water, which in turn attracts fish. There are now "no fishing" signs posted.

The county's first electric generating coal plant was the Waukegan Electric Light Company. It was founded by Michael Hussey about 1905. Hussey was known as the coal baron of northern Illinois in those early years of the 20th century. 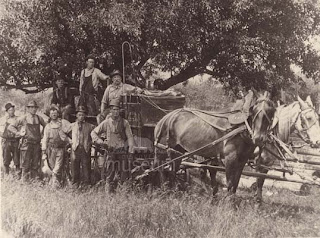 In 1923, Hussey’s company was bought out by Samuel Insull’s Public Service Company of Northern Illinois.

In the early teens, Insull set about revolutionizing the availability of electric service. Lake County was his home base and where he set his plans in motion by buying out small, independent power plants. He ran transmission lines and centralized the service, and was able to provide 24-hour electric service to thousands of homes and farms. (Samuel Insull, right) 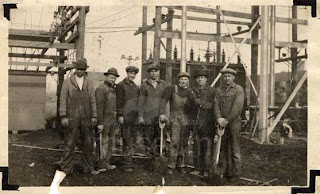 In 2007, the museum received a donation of nearly 60 photographs of the Waukegan Power Plant from a private donor. The photos are of plant employees in their daily tasks, posing candidly for the camera, and date from the 1930s to 1970s. (Power plant workers, circa 1935 - BBDM 2007.12) 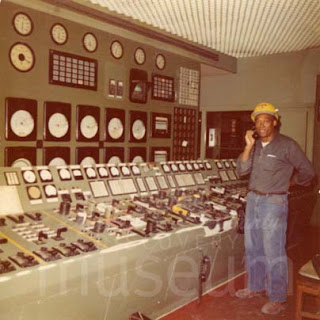 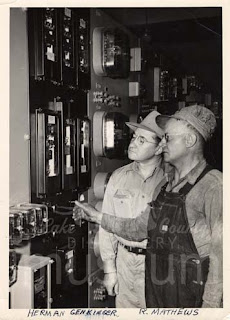 The images are remarkable because they document the power plant's workforce. Most candid photographs tend to be taken of people on vacation or at special events and gatherings. It is far less common for people to take photographs at work, making this collection all the more fascinating. 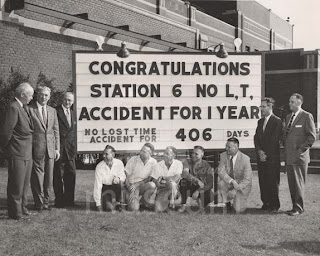 Diana, I geek out on historical photos, so I appreciate all the work you've done on this site. The Waukegan Power Plant surely to many is not a pleasure to look at, but at least by knowing more about it, we can better relate to it. Thanks for sharing.

I appreciate that, Karen. The power plant is a funny thing, because it's important to so many people yet not thought about on a deeper level. It's a very neat old building. I had the chance to walk along the shoreline near it and watch the fishermen some years ago. Thanks for reading and commenting!

I'm currently a summer Electrical Engineering intern there. It's owned by Midwest Generation now. The plant inside looks really cool. We have a lot of old equipment here and historical documentation.

It's a fascinating building. It's great to hear there are historical records at the plant. Hopefully they will continue to be preserved. Thanks for your comment!

Yes, I worked hard there. And it was a bit of history everywhere one turned. There were pipe elbows with swastikas on them, showing that we on
Center bought steel parts from Germany.
Although it was hard work, it put our children through good schools. And, they have.benefited from our labors. It hardly runs now and I can't find anyone that serves from working there to this day.if there out there, drop me a line, after all we spent more years working together than I did fighting a war!....BUBBA 1979-1995

Saw your entry 10 years later. I was also a EE intern there in 1971 from Purdue. Went on to get MS in Nuclear engineering from Northwestern and started up Zion 1 and 2 reactors in 73 and 74. I had fond memories of station 16 as it was called then.